Behind Mark of Odin #14: Releasing a saga I Today I change the mood with the Behind Mark of Odin series compared with the latest issues. This time I’m going to talk about how was the release in Spain, which fits with the commemoration of the 75th anniversary of the War of the Worlds radio show. So there’s no better way to honor it than revealing you the secrets behind the release of Mark of Odin in Spain!

Orson Welles was a great inspiration for me, with a magic and surprising way to reach people managing to make them believe it was a real story. Everyone that have already watched our release video #DesastreSevilla know what I’m talking about. Funny thing is that there are many similar coincidences between the air show ‘War of the Worlds’ and our #DesastreSevilla and Mark of Odin. Despite that sadly for me, the results weren’t the same.

Before going deeper about #DesastreSevilla and ‘War of the Worlds’ let me introduce you how I imagined the release of Mark of Odin. From the first moment, when I was shaping the saga’s universe, it was clear to me that releasing it wouldn’t be something done from night to day. To reach my objectives it would be necessary to do great efforts that in short term, could seem useless, but in the long term I hoped that you, my readers, would appreciate.

In that regard, there are many details I still can’t tell, as they could mean spoilers for many readers, but once the second book is published I could talk more freely about them in the next issue of Behind Mark of Odin. The fact is that three years before releasing the first book I started the first stage of preparations to reach D-Day with a solid base to work with. That strategy consisted in creating different websites to strength the “reality” from the fiction of Mark of Odin.

You can call them “viral webs”. These websites had no apparent relation with the books, despite in fact they are directly related. Nowadays few are the ones that have realized their real nature. As I said before, once the second book is live things will get more clear but meanwhile it’s up to you to try to find the truth, if you want to research of course!

If something was clear to me was that I would need to do a lot of noise for the initial release to reach the biggest media impact possible. Release a project like this being independent have so many handicaps, so one is forced to be creative to call the attention. At this point is when I recall the influence of Orson Welles and his War of the Worlds.

If you don’t know the War of the Worlds radio show from Orson Welles, I have to explain you that was a radio show about a figured alien invasion from Mars, radioed back in 1938. Nowadays, what is told is that many people from United States of America really believed that was something real, and not just a radio fiction.

Today we know that the radio show had, indeed, a small audience and that not many people was able to listen it. What happened then? Press media, that in that time was facing Radio as an enemy that was stealing their advertising income, decided to use that show to make jokes and attack the radio shows. They used hostile headlines. What they never imagined is that they caused just the opposite. They helped that War of the Worlds was spread massively. So everyone in the US was telling that they have, indeed, listened the radio show and thought that was a real invasion, despite they never listened it in real time. Thanks to this media campaign the radio show become a myth and launched Orson Welles to the fame in Hollywood.

My plan with #DesastreSevilla was to achieve something similar, saving distances of course. First was think what we could have for the video. I didn’t had to go far away, in the first book there was a scene ideal to get the desired effect. We only had to recreate it, but just a few tweaks to make it more enigmatic and try to not reveal stuff that was happening in the book. To achieve the biggest impact I gathered a group of more than one hundred people related to social media and news media in Seville to support the event. Plan was that just when we had published the video and shared the press release everyone would support via Twitter sending tweets like what was happening in the video was real. The idea was to create a reasonable doubt during the first minutes to make the video viral and assure the news media attention. Everyone would finally know that the video was fiction just watching it entirely but, we hoped to get the needed attention.

What happened? Like what suffered Orson Welles, there was some people that was against this marketing action and the Mark of Odin project, so they tried to sabotage it. One week before having all ready for the release, someone from the work group passed info from the campaign to someone working in Seville’s Town Hall, who didn’t hesitated to send fake info to the media without saying that all was a communication action and a fiction video.

The result was that El Mundo, ABC and La Razón, three national newspapers from Spain posted news in their digital editions. The news were about a writer from Seville that wanted to create havoc among the citizens to promote his book. Each of the newspapers used different versions of the fake news. One said that the writer was going to place pyrotechnical explosives under a bridge in the river. Other said that I was going to simulate an air accident in Parque del Alamillo. La Razón even put my name and they all said that the police was chasing me. I had already foreseen something like that, but I always thought that this would happen once I had all set. In that case their attack would have been really positive for me.

Sadly, neither the website nor the video were finished in that moment, so I had no other choice to use a Plan B. I had to release a press release in one of the viral websites for the book (Noticias Directo TV) explaining that the information was a fake used to proof that national newspapers didn’t investigate well their sources before posting news. I had no other choice to deactivate this, because some media was stating that even Judges were opening a file against me. All lies but the damage was there and I had to protect my reputation. 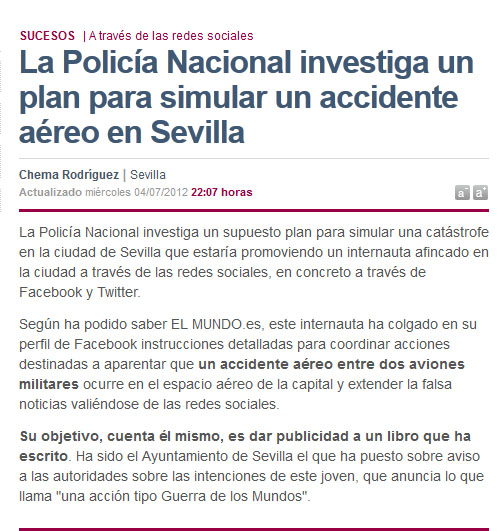 Next week, when all was ready the unexpected happened again. I always thought that a Wednesday in the middle of July would be a quiet day. Nothing big should happen in Spain… I was so naive. The same day of our release President of Spain, Mariano Rajoy, announced by surprise that he was going to raise the VAT taxes. That caused a media earthquake so… Wonder who didn’t get the media attention that had already secured using his contacts and friends? Yeah, me.

As you can see chance can be sometimes really capricious. One can be planning something during years to be sure that all is secured, even the last detail, but when time comes things can run like no one could imagine. Wait, this is not something negative per se, what matters when something unexpected happens is being able to react, adapt and take profit of it. Nowadays almost one hundred thousand people have already watched #DesastreSevilla video and finally national news media showed it on TV like RTVE, Cuatro or Telecinco TV channels. Not every independent author can say that.

At the end, the most positive thing is that you learn from your mistakes, not only from your succeed. So you can improve and get wiser every day. That’s all for today.