Party for the Union (PU) 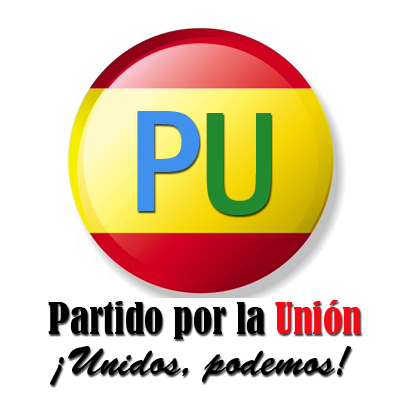 At the end of 2007, shortly before the January 2008’s general elections of Spain, the general social displeasure with the political class was evident. While the biggest international economic crisis since the famous crack of 29 made a dent in the world and, with special harshness, in Spain, both the government and the opposition parties did nothing but launch accusations at each other without proposing solutions for the future. The Spanish people had completely lost faith in their leaders and this was reflected in the polls, voting massively blank. Something completely unheard of in the history of modern democracy.

The political parties had to chant the mea culpa and accept that this time there was no turning back. A meeting was held between all the political forces in the city of Cádiz, cradle of the Constitution of 1812, where they agreed to call new elections six months later in the so-called 'Pacto de Cádiz'.

The citizens were not satisfied with that measure, they wanted a real change, not to repeat an election to obtain the same results. The mobilizations were total, not only in the streets, but within the same governing bodies of the political parties. The main forces of the country went into deep crisis experienced splits in their internal courts. New politicians and technocrats emerged to the public light with innovative ideas and renewed energies forming new political parties.

Among all these new public figures, one would specially highlight, Manuel Alonso. A young entrepreneur who, with only forty years, had managed to position his research and development company as one of the most internationally recognized. Deeply affected by the serious economic situation, he understood that the country needed deep structural changes to be competitive again and remedy all existing problems.

His arguments reached the hearths in almost all social strata and attracted to himself the most emergent values ​​of the old formations, both of the left and of the right wings, creating a political formation called PU (Party for the Union).

Thus, in the elections of June 29th, 2008, the PU, founded only a few months before, managed to seize power after getting more than 60% of the votes from Spanish citizens. In what happened to be one of the calls to ballot boxes with greater participation in the history of Spain, since the end of Franco and the so-called Democratic Transition. Manuel Alonso was proclaimed President of the Government of Spain and in his inaugural speech he not only promised to solve the serious crisis affecting the country. Its main objectives were based on the structural reform of the Spain’s productive fabric. Until that moment, the country was very dependent on construction, so he wanted to focus on strengthening the tourism industry and, above all, to make the country a benchmark in terms of research and development of new technologies and products. His dream was to achieve a Spain of services, but at the same time, a nation capable of being a reference in innovation and a key actor in international relations.

After more than two years since he reached the power, it could be said that the new PU government had not limited itself to words, but had worked hard to make that dream a reality. The image of the country was enhanced in the face of international tourism. New investments arrived for new infrastructures and quality of services. Obtaining the first fruits in the summer of 2010, when Spanish hit a new tourist visits record. On the other hand, at the end of the summer of 2009, a transcendental agreement had been reached, with the support of the United States, to build the new European Aerospace Center in Spain, specifically in the city of Seville.

Undoubtedly, the achievements of the PU have been remarkable. Even so, there are people who are not happy with the new status quo of Spain. Influential people to whom these changes have significantly impacted and who would do anything to return to the previous situation. Be that as it may, PU members, with President Manuel Alonso as a leader, feel strongly and energetically to continue with the line of progress they have marked. And for the moment, they enjoy maximum international support. Especially from the United States, a country that has proved to be an essential ally for the PU and Spain. Reason why it has been invited to attend and participate in the great military exhibition to be held in Seville on the occasion of ‘Día de la Hispanidad’.