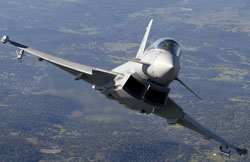 The Project was initiated by a technical requirement from several countries to replce the SEPECAT Jaguar, Panavia Tornado, McDonell Douglas F-4 Phantom II, Lockheed F-104 Starfighter and Dassault Mirage F-1 of various European Air Forces. The trigger for the coming of this new fighter was, among others, the information received about the new Soviet prototypes RAM-K and RAM-L, known later as Su-27 Flanker and MiG-29 Fulcrum. The aircraft was designed taking into account the technical requirements of some NATO Air Forces such as Germany, France and the United Kingdom. However, the French Air Force soon abandoned the project when they decided to build a custom-made aircraft where Dassault led the design and the other partners limited themselves to jointly financing the project, and the Armée del Air was not happy with designs such as the TFK-90 or the P110.B, on which the Eurofighter is based, preferring a smaller and embarcable aircraft. So France abandoned the European project, to create its own fighter, the ACX (acronym of Combat Aircraft Experimental), which would later become known as Rafale A.

Thus, in 1982, the ACA (Agile Combat Aircraft) program was presented, in which Italy, Germany and the United Kingdom appeared as partners. They tried to create a program for a technological demonstrator called EAP (Experimental Aircraft Program), but the British government did not finance it and in the end it had to be the Bae (British Aerospace) itself that financed the project, taking advantage of parts such as the tail section of the Tornado and its RB199 engines. The EAP made its first flight in 1986 and was immediately successful. There were some voices that wanted that same plane to enter service in the Royal Air Force (RAF), but the development of the more conservative Tornado F.MK3 stopped getting funds for the project. However, at the same time, Germany was developing the X-31 prototype, along with the US company Rockwell to have technologies applicable to the future ACA, although the newest, the adjustable nozzle 3D wasn’t used to fit the Eurofighter, at least in a first moment. The Eurofighter comes in a great part from all the tech developed and tested in the EAP. 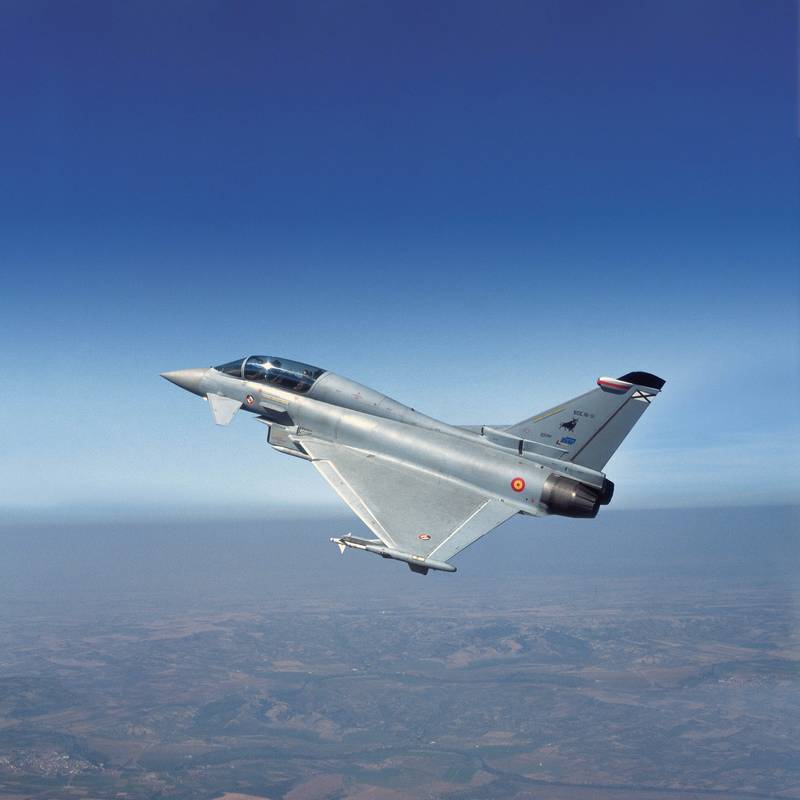 Spain joined the project on September 2, 1985, although it had followed with interest the evolution of events. From that moment the project was known as EFA (European Fighter Aircraft) and several consortiums were set up to carry out the various parts of the Eurofighter plane. For cell and systems integration, for Eurojet engines, for the EuroDASS security system, etc. Due to the end of the Cold War, the project suffered a break due to the high costs of German reunification, which meant that the project was delayed for about five years. Meanwhile, the partners discussed ways to reduce the price of the plane, as well as all the overall costs of the program, by eliminating aircraft systems (For example, the high protection against electromagnetic radiation pulses), or by reducing the number of prototypes. Finally, on Mach 28, 1994, the first DA01 prototype flew from the MBB factory in Manching, piloted by Test Pilot Peter Weger. For eight years the seven prototypes of the program made numerous flight hours to reach the manufacturing phase at the beginning of 2001.

The project has been named and renamed several time since its birth, being known as EFA, Eurofighter, EF2000 and Typhoon.

The characteristics of the Typhoon are a good example of its development, The Typhoon cell was designed to be unstable in flight (with canards and a truncated delta wing), which gives it a great maneuverability. To solve the issue of instability, a redundant Fly-by-wire quadruple flight control system is used. 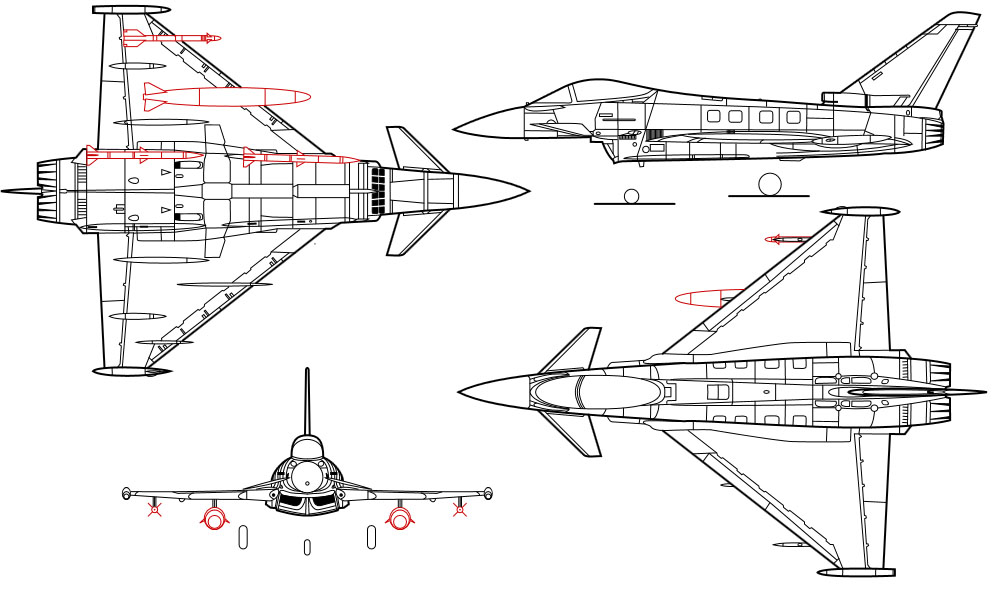 In the turns it maintains the energy perfectly when having a relation push to weigh of 1,15, in addition to that the EJ200 engines allow it to fly in regime of super cruiser.

The aircraft is manufactured in large parts by compounds such as fiberglass or carbon fiber, which provide greater structural rigidity to the cell, allowing it to perform maneuvers with very high G-force values. The ejector sea is of the Zero-Zero type, built by the manufacturer Marin Baker, and is capable of ejections at more than 600 knots of speed. Despite not looking for low detectability characteristics as a requirement, as the F-22 Raptor has done, the Typhoon has its well-kept shape to try to be as less detectable as possible to radar illumination.

The Typhoon combat performance, comparing it with the USA F-22 Raptor and F-35 Lightning II and the French Dassault Rafale, has been subject of much debate. Although making totally accurate and ubiased comparisons is impossible with the public information available, there is a study by the Defense Evaluation and research Agency of the United Kingdom comparting the Typhoon with other contemporary fighters; in this study the Typhoon was the second only after the F-22. (Source: Wikipedia)

The Eurofighter Typhoon is the main fighter bomber of the Spanish Air Force. Currently its used in three air squadrons. Two located in Moron Air Base and the third one in Los Llanos Air Base.

111th Squadron – Diablos de Hispania has achieved international renown for its expertise with the Eurofighter Typhoon, being the only ones that have piloted this aircraft in combat operations and surveillance missions in scenarios as Iraq, Afghanistan or Libya. When they are not on official missions, the Eurofighter Typhoons from Moron Air Base can be spotted in many areas of southern Andalusia, where they perform maneuvers and routine exercises. 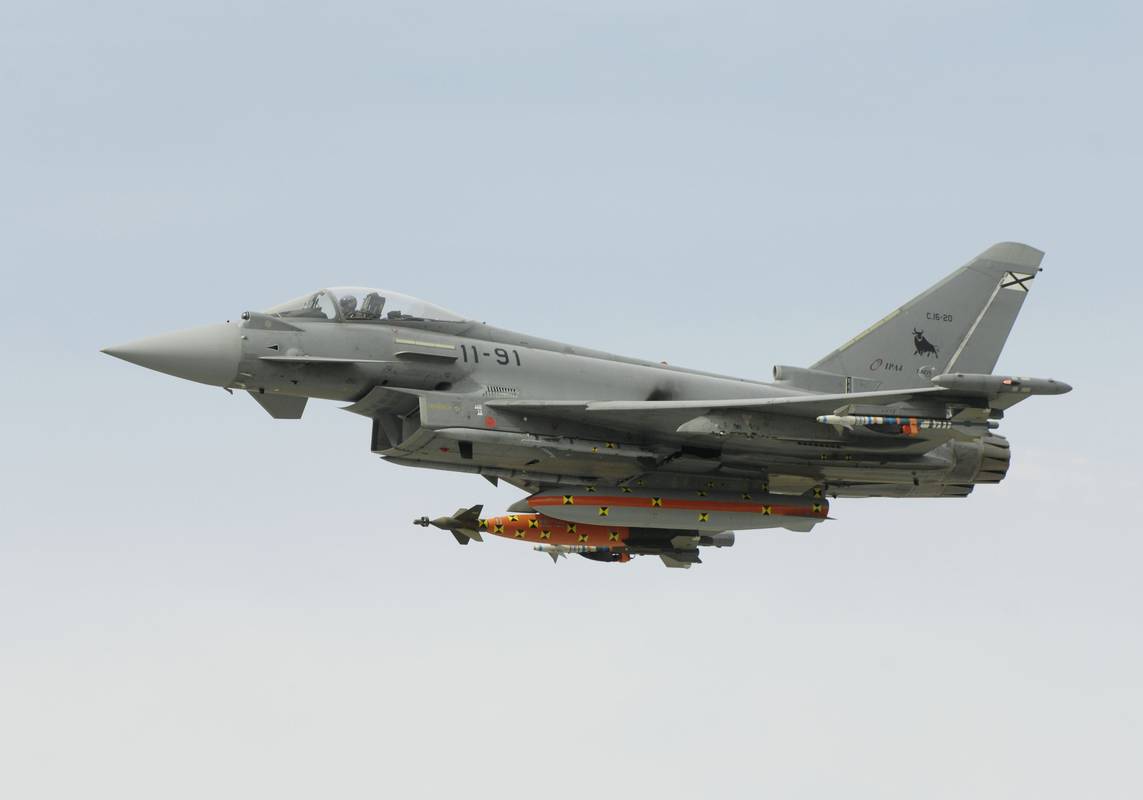 Undoubtedly, the Eurofighter Typhoon has become the main flagship of the Spanish Air Force, gradually replacing the US F-18 and the French Mirage F-1. It’s clear that if Spain were to enter into an air conflict one day, the Eurofighters would be the main assets that would defend the Iberian Peninsula skies.